“Avant-garbage” fashion at the CU Museum of Natural History 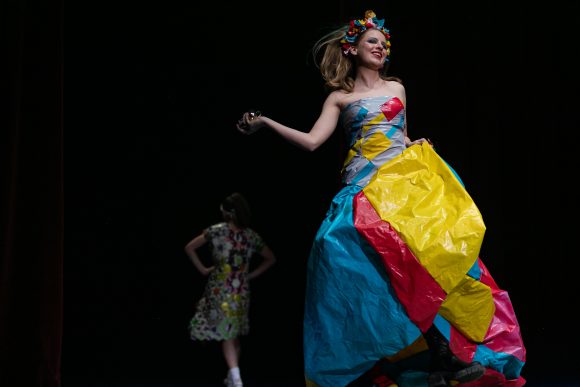 A designer models their piece during the Trash the Runway fashion show on the University of Colorado Boulder’s Mackey Auditorium stage on Feb. 17, 2022. (Io Hartman/CU Independent)

In the basement of the University of Colorado Boulder’s Museum of Natural History, 12 stunning outfits are perched atop mannequins in the center of a completely unrelated exhibit about Antarctica. Despite the posters and displays describing our planet’s most elusive continent, the display of couture in the middle of the room undeniably commands attention.

This is Trash the Runway, a stunning display of original garments all constructed by local designers in grades 6-12. According to signage at the event, every piece of clothing shown in the collection is assembled using found and recycled materials that were going to be thrown away in order to minimize environmental impact. Materials used range from Whole Foods receipts to IBM computer tape, candy wrappers and tire inner tubes. 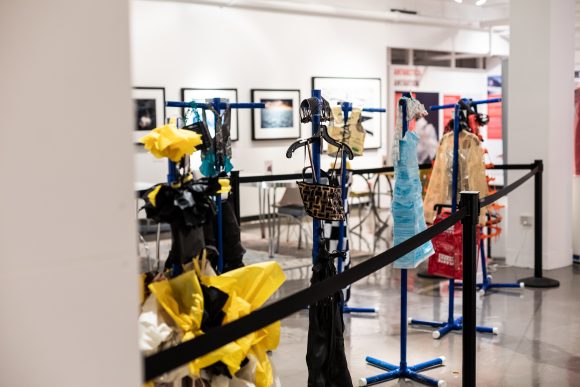 Clothing pieces designed for Trash the Runway hang in the basement of the Biolounge’s Musuem of Natural History on Sunday, Aug. 28, 2022. The exhibit, which has already been extended, will be closing on Sept. 12, 2022. (Io Hartman/CU Independent)

Suzanne Balog, the Marketing and Communications Director at the CU Museum of Natural History, said that the exhibit is always a favorite of attendees at the museum, and it’s exciting to discuss the real-world issues that the exhibit addresses.

“When students are creating these ‘avant-garbage’ creations, they’re taking trash out of the trash stream and making it into something useful,” she said. “That’s how it intersects with our mission at the CU Museum, where we say Earth Day is every day here.” 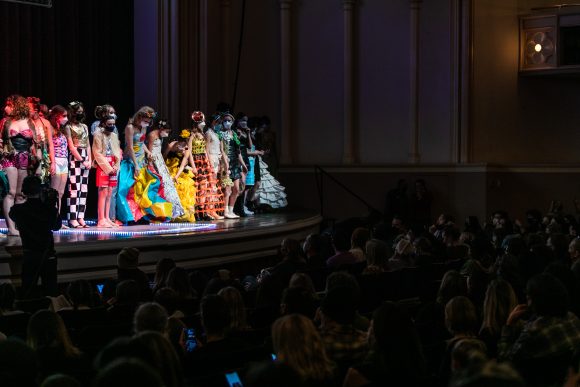 The 2021-2022 participants of the Trash the Runway program stand together on stage before being presented with awards at the University of Colorado Boulder’s Mackey Auditorium stage on Feb. 17, 2022. (Io Hartman/CU Independent)

The exhibit hopes to address an issue devastating the planet: textile waste. Signage at the event, printed on recycled paper, explains just how pressing this problem is. According to the signage, the fashion industry is one of the most polluting industries in the world, and 20 percent of industrial water pollution worldwide comes from treating and dyeing textiles.

Additionally, the average American discards over 80 pounds of textiles and clothing into landfills each year. That’s despite the fact that clothing can be reused, extending the life of the garment and diminishing its environmental impact. 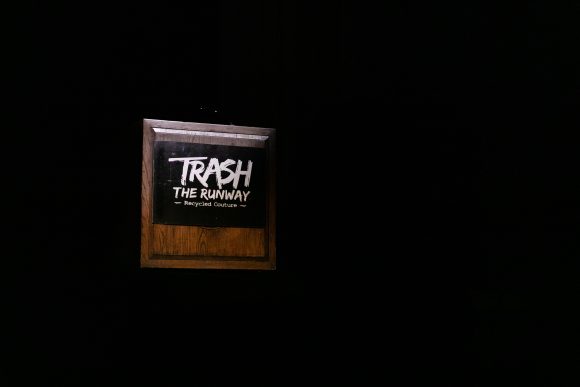 “I just thought it would be a really fun way to help the earth.”

Emma Tomasko was an eighth grader at Sacred Heart of Jesus School in Boulder when she designed a beautiful two-piece set for 2022’s Trash the Runway. The top and skirt were constructed using bike inner tubes, IBM computer tape and door and window screens. 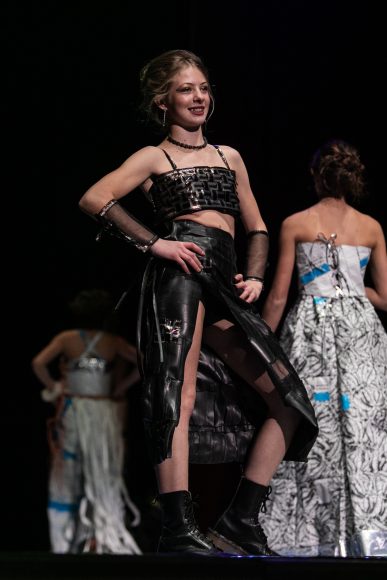 The top features an open back with straps, detached arm cuffs made of the same materials, and an intricately woven pattern of crisscrossed computer tape. The skirt is primarily made of a bike inner tube with patches of the same woven computer tape, featuring a high slit in the wrap skirt and a bow to tie it all together. Her design earned her the 2022 Trash the Runway “Design Award.”

Despite sewing here and there in her free time throughout her life, Tomasko says that Trash the Runway is the main sewing she’s done. This is, in part, because of the message the exhibit sends to the public.

“It’s important to me to participate because of the global pollution standpoint,” Tomasko said. “I just thought it would be a really fun way to help the earth.”

Tomasko said the design and construction process took several months, partially due to trial and error when working with recycled materials. 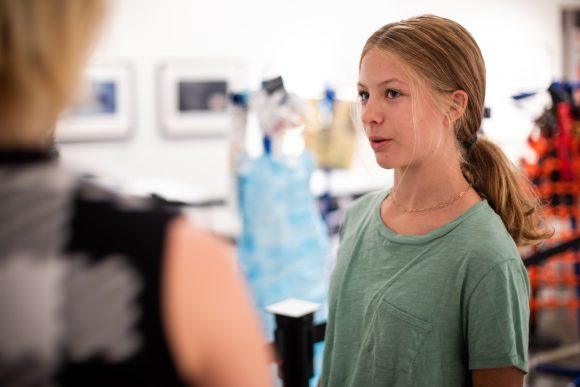 Designer Emma Tomasko speaks about her design process during an interview with the CU Independent at the Trash the Runway exhibit in CU’s Biolounge in the Musuem of Natural History on Saturday, Aug. 28, 2022. (Io Hartman/CU Independent)

“I liked the computer tape because it was super thin,” she said, “but it has this stickiness inside it and it would get caught on the needle and then break the needle. So that was hard because I had to hand sew some of it.”

Tomasko hopes that audiences of this exhibit connect with the message of sustainability that runs throughout.

“I hope people learn that treating the earth [well] is very important,” she said. “Pollution is really getting bad, so I hope people start realizing that.” 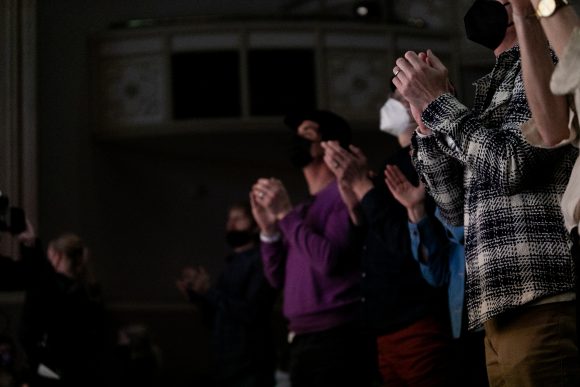 Parents and families applaud the Trash the Runway particants during the show at Mackey Auditorium on Feb. , 2022. (Io Hartman/CU Independent)

“Fashion is a way to make a statement.” 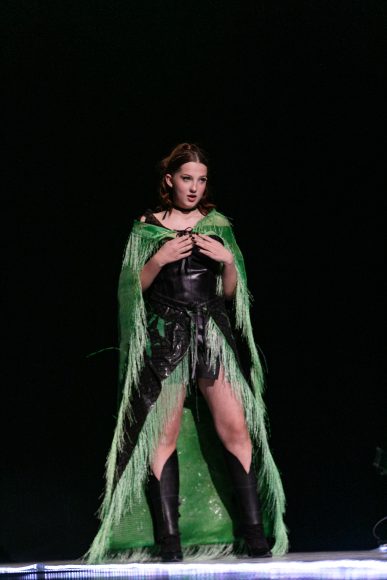 The entire design consists of a black corset made mostly of the tractor tire inner tubes, with a peek of the green landscape fabric along the top of the neckline. The shorts follow a similar structured design to the top, using only the inner tubes. The highlight of this design comes in the form of the bright green train, sporting the roman numeral “XIX” along the length of it. When Jones modeled the design on the runway, she wore the fringed train as a cape tied around the neck, eventually throwing the train behind her to reveal the pattern, effectively transforming the outfit before the audience’s eyes. This design and performance earned Jones the “Runner-Up” award.

The inspiration for the design came from that number: XIX. It’s the numeral for 19, signifying the amendment to the US Constitution that granted women the right to vote. Jones says that this message was important for her to send, citing recent developments in the United States feminist movement. 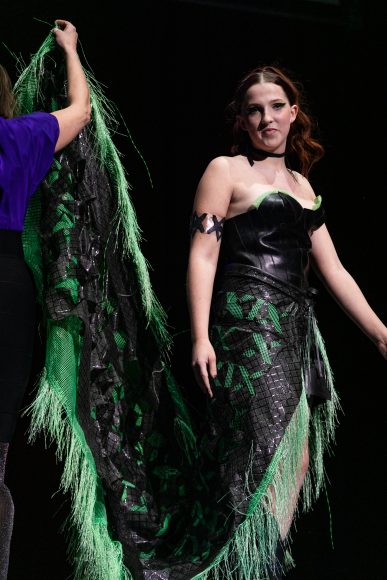 Designer Sophia Jones is assisted with the long train of her piece during the Trash the Runway fashion show on the University of Colorado Boulder’s Mackey Auditorium stage on Feb. 17, 2022. (Io Hartman/CU Independent)

“With Roe v. Wade, it definitely felt like women’s rights were starting to be changed a lot,” she said. “I was like, hold up. What is happening?”

Jones wanted to speak through her design, recognizing fashion as a way to amplify her young but powerful voice. 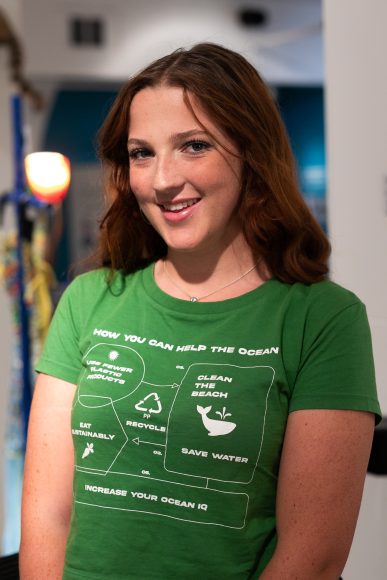 Sophia Jones poses for a portrait during her interview with the CU Independent at the Trash the Runway exhibit in the basement of CU’s Biolounge and Museum of Natural History on Sunday, Aug. 29, 2022. (Io Hartman/CU Independent)

“I know that even though I’m only 15, and I’m going to Boulder High School, I wanted to just show what I’m passionate about and make a political statement with fashion,” she said. “Because fashion is a way to make a statement.” 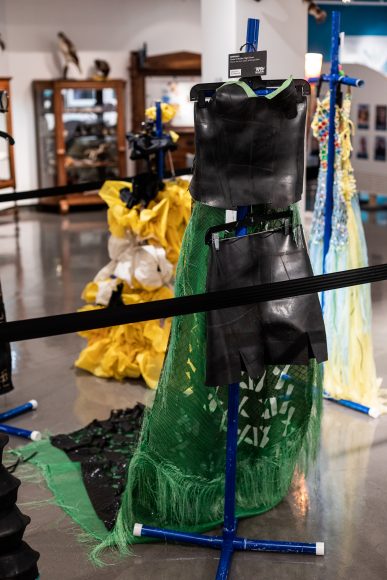 Designer Sophia Jones’ garment set for Trash the Runway sits in the basement of CU’s Biolounge in the Museum of Natural History on Sunday, Aug. 28, 2022. (Io Hartman/CU Independent)

Jones says that the Trash the Runway design process needs to start months in advance in order to begin collecting materials to use for the design. She was able to crowdsource the tractor tire inner tubes from someone on Instagram and the landscaping fabric from a friend. From there, the design process was complex but eventually fell into place with the design she ended up using.

Jones sees Trash the Runway as a mode of personal expression, but also as a form of education.

“You can express yourself: [express] everything in your life, and what you’re passionate about, and fashion is a really amazing outlet to express it through,” she said. “It can also be an educating moment to show people what one person’s trash can be turned into.” 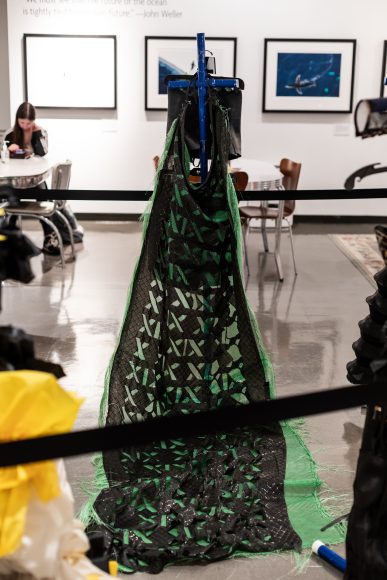 Designer Sophia Jones’ garment set for Trash the Runway sits in the basement of CU’s Biolounge in the Museum of Natural History on Sunday, Aug. 28, 2022. The train is over five feet long and used recycled materials to make a statement referring to the 19th Amendment. (Io Hartman/CU Independent)

“The coolest things are all around you.”

Grace Abboud was in ninth grade at Fairview High School when she crafted the dress that would win her the Grand Prize for 2022’s Trash the Runway. Abboud constructed the floor-length gown by weaving together vaccine caps, wires, and COVID hospital gowns. 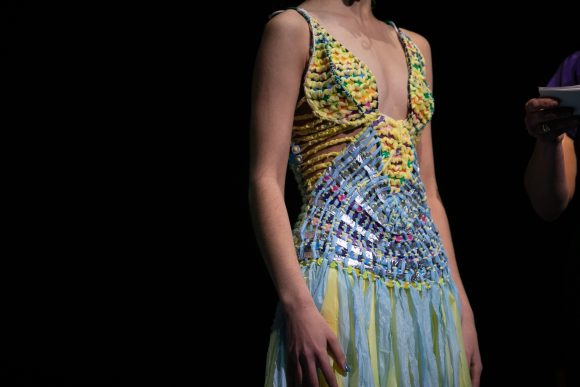 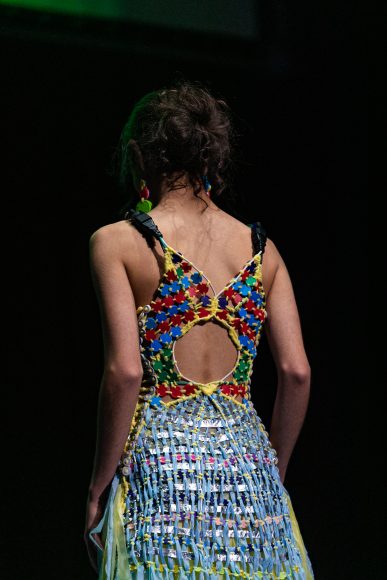 The dress is stunning. The bodice is bright and intricately woven from pink, orange, green, yellow, purple and silver wires, creating an explosion of rainbow across the top. The back is primarily multicolored vaccine caps, creating a circular open back. The skirt of the dress is flowy and long, creating a fringed skirt from the remainder of the fabric used to weave the top. 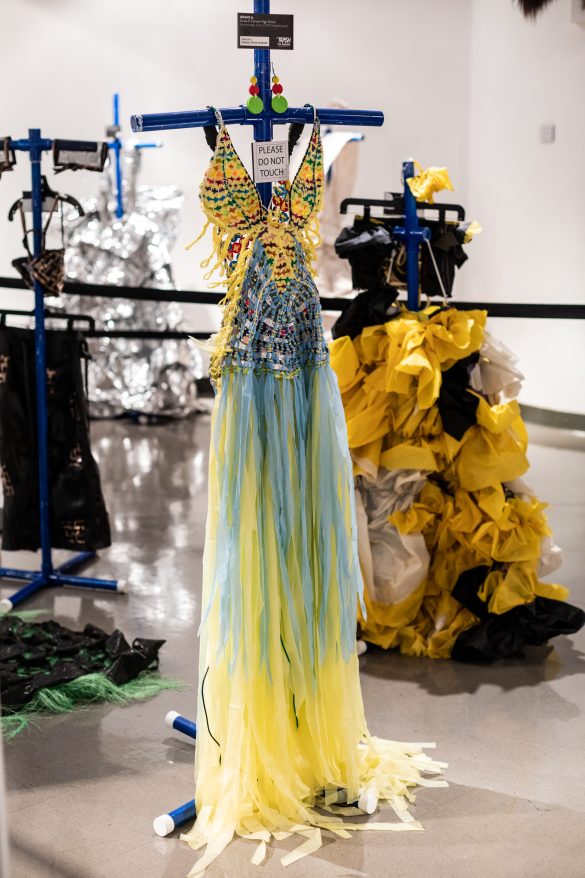 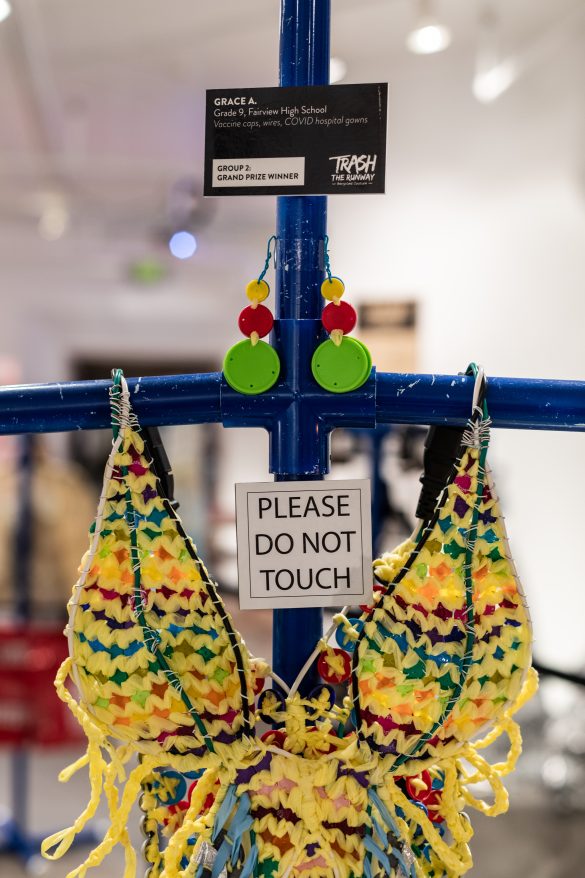 “Everyone from Wardenburg, for months, collected the caps of the vaccine for me,” she said. “The wires were from old computers they were throwing away, and [the blue fabric] is the gowns they wear when they see COVID patients.”

Not only was it important for her to construct something relevant and timely to the world around her, but she also wanted to show that anyone can create something beautiful out of what’s around them.

“The coolest things are all around you,” she said. “If you look for them, even in the simple things, you can make something really awesome. It can help a lot of people, including yourself.” 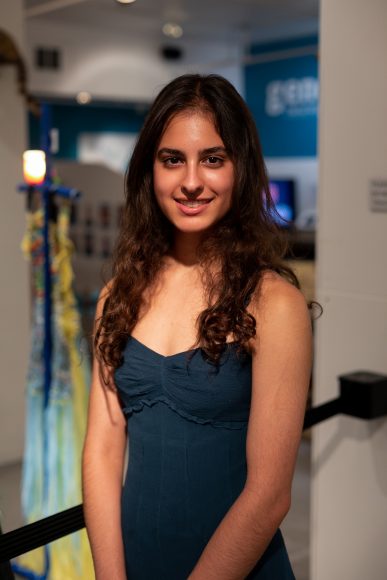 The construction of the dress was time-consuming, but the silhouette was the first thing she imagined. Abboud knew she wanted the weaving to result in an open circle at the back, so she played with the shape on her mannequin until it was just right. Then, she had to hand stitch the caps together by individually punching four holes in each cap to connect them.

Abboud was first introduced to Trash the Runway back when she was in fifth grade when her friend offered her an extra ticket to see the runway show.

“It just blew our little fifth-grade minds,” she said. “We got posters and we were drawing our future designs on the back. The next year I signed up and have done it ever since.”

Grace loves Trash the Runway because of its ability to bring students together for one common goal. 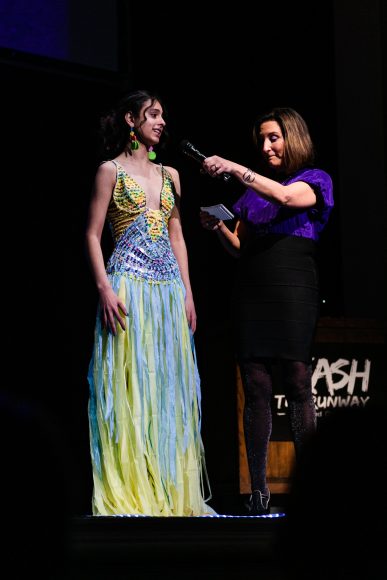 “It’s not just super artsy people,” she said. “It’s people who play soccer, people who play softball, just all kinds of people who all come together and do this really cool thing. I’ve made a lot of friends through Trash the Runway that I wouldn’t have known otherwise.”

The Trash the Runway exhibit at the CU Museum of Natural History will be displayed until September 12. It’s located in the BioLounge in the basement of the museum and is free for all attendees.