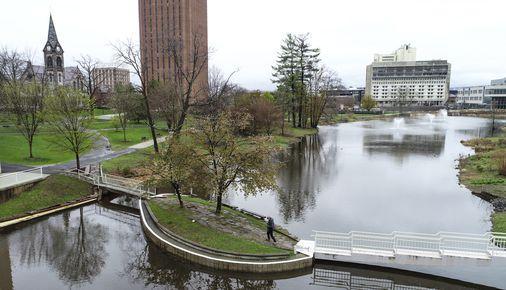 Gov. Charlie Baker and Lt. Gov. Karin Polito joined officials at the University of Massachusetts Amherst on Thursday to break ground on a $125 million computer science facility set to open in the spring of 2025, officials said. rice field.

The 90,000-square-foot facility, which received $75 million in state funding, will connect the university’s existing computer science buildings to an “open, light-filled commons for graduate and undergraduate students,” providing special-purpose Includes lab and collaboration.student space university officials said in a statement.

“This new, state-of-the-art academic building will provide students with the resources and skills they need to achieve in and out of the classroom,” Baker said in a statement. “Our administration is proud to support the University of Massachusetts and the Manning College of Information and Computer Science in helping the next generation of scientific leaders learn, succeed and innovate.”

Baker said he is confident the state’s investment in the facility will pay off.

For Massachusetts to remain a technology leader, Polito said the state’s thriving science and technology sector needs a “strong talent pipeline,” and that the university’s “Manning Information and Computer Science The College supports students and faculty as they research and develop exciting new advances.” Cutting-edge fields and industrial sectors.

“The Mannings and the Baker-Polito administration know when they see smart investments,” Subhaswamy said in a statement. “CICS will continue to deliver strong returns on investment, advance key federal innovation areas, and deliver scientific discoveries in key areas such as healthcare, sustainable computing, cybersecurity, and human-centered technology. We will move forward.”