Increase in the number of female scientists. CSIR head aims for further boost

“The increased participation of women in research, in particular, is due to a combination of government programs and natural progress. Personally, I have never faced any problems in my career. I’ve seen it tend to drop out,” Dr Kalaiselvi told The Indian Express.

But “in previous decades, this was more of a thing, because the infrastructure just didn’t exist to carry out research and family duties at the same time,” she added. No. Many CSIR labs have childcare facilities in residences where female scientists live, thus increasing female participation Parental attitudes towards girls pursuing science have also changed. and the girls are more encouraged now.”

Overall data show an upward trend, but there are fewer female researchers in engineering and technology than in the natural sciences, health, and agriculture. At the postdoctoral level, the number of female researchers is lower than the world average.

As head of CSIR’s network of 38 laboratories and 4,500 scientists, Dr. Kalaiselvi said she aims to further increase the participation of women within the organization. 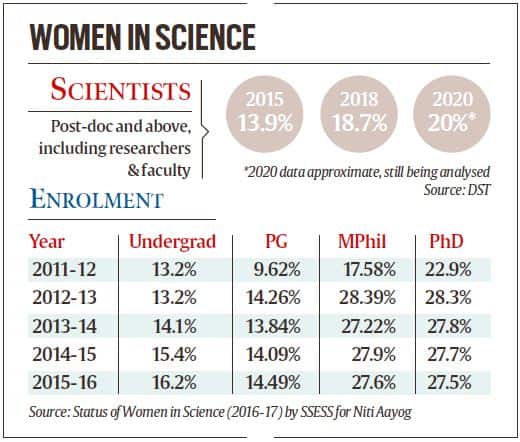 Dr S Chandrasekhar, Secretary of the Department of Science and Technology (DST) said: S&T — Women are using more sophisticated tools that enable remote work, including things as simple as accessing her library online. Even chemical science and industry is getting smarter and cleaner, and I think more women will be employed. ”

Results from the All India Survey of Higher Education (AISHE) 2019 show that 53% and 55% of women participate in science education at bachelor and masters levels respectively, a figure that is higher than many developed countries. Comparable. However, female graduates (44%) lag behind male (56%) in doctoral programs.

“[Women’s]participation was observed to be healthy up to the graduate level. However, we see a decline at the postdoc level, where most research is done. This is also increasing, but still below the global average of 30 % well below.

The ministry aims to increase women’s participation in S&T to 30% by 2030, according to Dr Gupta. “We are already pushing that… out of DST’s 97 scientists, 35 are women. But a big achievement is that 11 of the 18 DST departments are now headed by women, which is 61%, perhaps the highest percentage of women in leadership in any government department. It’s probably the highest percentage,” Dr. Gupta said.

He said the number of scientific researchers in India has doubled from 30,000 in 2014 to more than 60,000 today. Last year, the Gender Advancement for the DST-backed Transforming Institutions (GATI) project, based on the UK’s Athena Swan Charter, was introduced. In the first phase of GATI, 30 teaching and research institutions were selected by the DST, focusing on women’s participation in leadership roles, faculty, and the number of female students and researchers.

“In the first phase, which is now completed, institutions under S&T, including institutions of national importance like IISc, five IITs, BITS Pirani, research institutes like ICAR and universities like University of Delhi, We chose a combination of ,” says Dr. Nisha. Mendiratta, who leads the GATI project, said: The DST plans to study women’s participation in these institutions over the next few months.