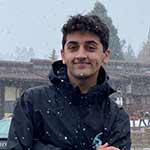 Faris Ashai, a math and computer science student at the University of California, San Diego, was recently featured in the 2022 Major League Hacking (MLH) Top 50. MLH compiles this list each year, featuring the most inspiring members of the hackathon community, recognizing the tech ecosystem and his contributions to STEM education. Hackathons are software, small hardware, or app development sprints for computer programmers, often over the weekend. It’s not hacking into sensitive cyber domains that might come to mind.

Ashai was recognized for creating new opportunities to make the hackathon community more inclusive and accessible. As the organizer and director of her TritonHacks, her annual 30-hour hackathon for high school students at the University of California, San Diego, Asshai provides industry mentors for each participant, regardless of skill level, and novices. We provided participants with a highly effective starter her kit.

Nick says: “It is a tremendous honor to be selected as an MLH Top 50 winner, each from a pool of over 150,000 active community members, one in three new programmers in the US (and Internationally there are many more),” said Quinlan, MLH Chief Operating Officer. “Being selected means your work is recognized in the top 10 of today’s top 10 percent of new techs.”

In this Q&A, learn more about Ashai’s decision to study math and computer science at UC San Diego, his involvement on campus, and how the skills he learned through the hacking community will help him in his future role.

Q. Why did you choose to major in mathematics and computer science?

A. I decided to pursue mathematics and computer science majors because it seemed like an interesting balance between my two interests. I’ve always been interested in math, and when I took my first coding class in my sophomore year of high school, I quickly realized that it was something I wanted to pursue for my career. What was really interesting about looking at the options for a major at UC San Diego was that I was able to dive deep into higher division courses in both subjects without committing to a full double major course load. After completing core classes, you can now choose electives that interest you. I found the right overlap where my interdisciplinary knowledge helped me to be more successful than my individual majors.

Why did you choose UC San Diego?

A. I’m from Los Angeles, so I wanted to stay on the west coast by the beach in nice weather, and UC San Diego was perfect for me because of all the great engineering programs available and the beautiful city!

What activities have you been doing on campus? How has UC San Diego helped you improve your hacking skills?

A. I first learned of the existence of a student organization called the Association for Computing Machinery (ACM) at an event called Engineers on the Green during my freshman year at the University of California, San Diego (just a few months after its founding). After joining the company, I found an amazing community of students passionate about computing topics and engineering, and saw countless opportunities to step out of my comfort zone to develop new technical skills, leadership experience, and communication skills. Through friends in this organization, I became more involved with the Hackathon his community and another team in the group CS foreach. The team organized a high school hackathon and later served as director of this one year. Through countless hackathons as a participant, I’ve always been inspired to compete and improve myself with the friends he’s found at UC San Diego.

How will the skills you learn through the hacking community help you in the future? What career are you interested in?

A. I wouldn’t have been where I am today without participating in the hackathon community. My first use of React, a popular front-end web development framework, was in a second hackathon project called ResReview. I have continued to use this framework for several hackathons and have seen significant improvement as I become more familiar with the skills I learned to build products quickly in a team environment. I think that’s one of the biggest reasons I got it. I am using these same skills daily in my current internship and will likely be using them for years to come.

What do you want to do after graduation?

A. I am currently planning to go into software engineering after graduation and am excited to delve deeper into this. But I also think it would be interesting to eventually move into a more product management role to gain broader influence over the products I’m working with.