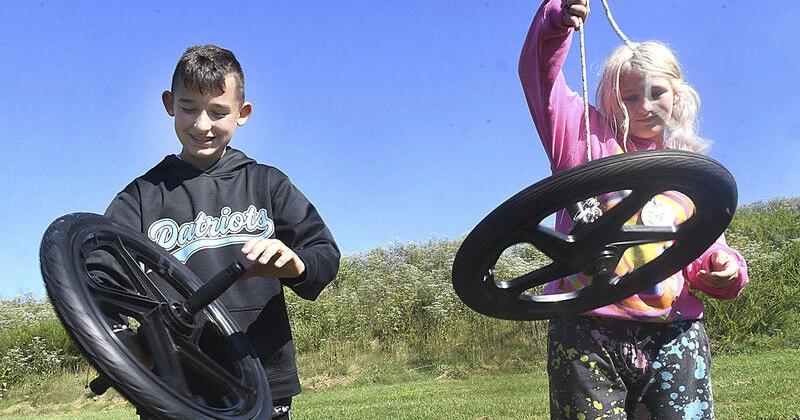 Junior high school students shooting arrows at targets and riding downhill on BMX bikes may seem like simple play or games, but we are also learning the science associated with each of these activities.

Sixth grader Aiden Dickinson said this was his first time using a compound bow, but he felt he quickly got the hang of it.

“I even hit the bullseye once,” Aiden said.

After shooting a few arrows, the students were ushered to a nearby tent where instructors gave them instructions on how to make archery possible in a session called “The Science Behind the Sport.”

So the 6th graders learned about the pulley-like cams at each end of the bow that help make the bow cable easier to pull.

Next, we learned the trajectory of an arrow shot from a bow and how a certain amount of force is required for the arrow to hit its target.

With these thoughts in mind, the students returned to the archery range and continued shooting arrows, but now they understood the science and skills that make everything possible.

Students also participated and learned the science behind cycling, rock climbing and paddling.

Sixth grader Kayleigh Williams said rock climbing was the most interesting topic she’d ever learned. As an aspiring doctor and/or pharmacist, Kaley has always been fascinated by how people’s bodies work, she said.

“With rock climbing, we learned about human anatomy and how the feet primarily work,” she said.

She added that the week-long camp is not only about STEM learning, but also about mastering social skills that have been hampered by Covid in recent years.

Creating these social and emotional connections is one of the key components of the program’s curriculum, says Ali Jenny, director of the Science Adventure School.

“We don’t want them to have the experience here,” said Janey. “They don’t just come and learn and stop.”

As this takes place early in the year, Jenny hopes the camp will help these students transition from elementary to middle school by creating positive experiences that will be shared with peers and teachers. said.

She also has an environmental education aspect to the program, where students learn about different types of soil, test water samples from the nearby New River, and learn about the importance of sustainability with respect to forest ecosystems. added.

For one of the learning sessions, Jenny said students can travel to Thurmond, located within the New River Gorge National Park and Preserve, and learn from park rangers.

Sixth grader Aaron Rash said he taught us about the animals that live in the river and the types of tests the rangers do to determine the health of the New River.

“Today we found a lot of crayfish, so we knew they were healthy,” Aaron said.

Renee Richardson, a sixth-grade science teacher at Independence Middle, said it was her third time attending the Science Adventure School with her students.

She said she noticed that after her students returned from camp, she was more engaged in her classroom and excited to learn.

“It’s a great opportunity to learn in an environment outside the classroom,” said Richardson.

In the coming weeks, all 6th graders from the four remaining Middle Schools in Raleigh County will have the opportunity to participate in Science Adventure School, which began in 2019.