The Health Outcomes Assembly brings together healthcare, education and nonprofit organizations to think and strategize on health inequalities. 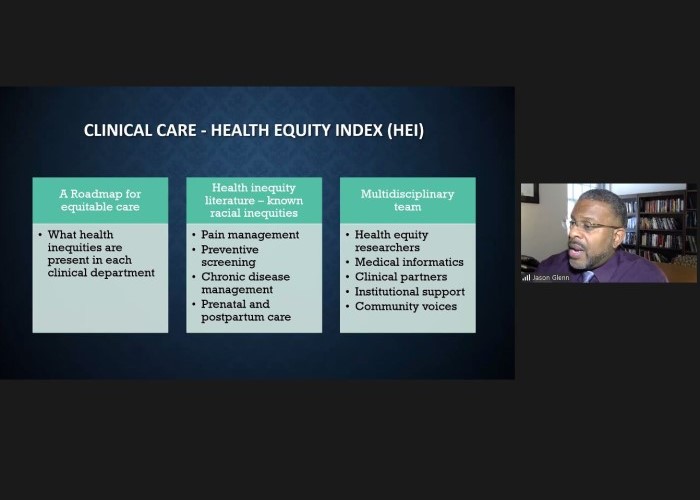 Can everyone in Kansas have equal access to health care? If not, how can we close these health disparities so that people who live in the state can live healthier lives? will you do?

“We launched this important initiative last year to uncover the impact of healthcare inequalities in marginalized communities,” said DNP’s Vice Chancellor for Diversity, Equity and Inclusion. One Jerrihlyn McGee explained. “This year’s focus is on health disparities between counties and zip codes.”

Such small geographic regions provide a wealth of comparative data, identifying not only where health challenges exist, but also the depth of the challenges. But, as one moderator pointed out, researchers shouldn’t focus on the micro-elements of the data, remembering that those zip codes are representative of the people who live in them.

“Postal codes are a great way to talk about data. But what is missing when talking about zip codes is people. We’re talking about important things,” said Matt Kleinman, program manager for the Wyandot County Health Equity Task Force (HETF).

“I hope that today’s panel will make that happen. Approaches to improving health equity are really happening in our neighborhoods,” he said.

HETF was developed by local activists, civic leaders, and the county faith community with push from a KU Medical Center grant program called RADx-UP. The goal of that grant was to increase her COVID-19 vaccinations in marginalized areas of the state. The task force’s objectives have been expanded to include other health issues facing underserved residents of Wyandot County.

Recommendations from the Governor’s Commission


During the conference call, a team from Kansas Gov. Laura Kelly’s Commission on Racial Equality and Justice announced goals and achievements on health disparities in Kansas. Dr. Shannon Portillo, associate professor in the University of Kansas School of Public Relations and Management, serves as co-chair of the committee. She explained how the group was founded in 2020 following protests spurred by the death of George Floyd and racial injustice within the criminal justice system.

“[Governor Kerry]asked us to reform the entire system in Kansas, not just criminal justice reform,” Portillo said. Over the past year, she noted, the commission has been examining the social determinants of health—factors such as economic stability, quality of education and access to health care that ultimately affect a person’s health. A report of their recommendations is available on the governor’s website.

Faculty members from the KU Medical Center and practitioners from the University of Kansas Health System also contributed to the conference on health outcomes. Along with other conference attendees, they shed light on the history of health disparities in our region and our commitment to hope, collaboration and funding to remedy these disparities in the future.


For example, Dr. Jason E. Glenn, Associate Professor of History and Philosophy of Medicine at the KU School of Medicine, described the REPAIR (REPAIRs and Anti-Institutional Racism) project, an initiative used by the KU Medical Center. As a framework for anti-racism efforts and curriculum development. The REPAIR project has his four pillars, one of which is to educate the next generation about how racism has persisted in medicine.

“The legacy of racism that exists in our curricula and education should be removed so that our learners and faculty become structurally competent in all social and structural determinants of health. We were talking here this morning,” Glenn said.

The work of many clinicians and researchers concerned with health inequalities was also outlined at the 2022 Health Results Conference.

“As an academic institution that trains the majority of health care providers in Kansas, we need to make it one of our mandates to train health care professionals who are sensitive to all these issues around us,” he said. said, “When you become a practitioner, you become a positive solution to a positive direction instead of being a propagator of the same problem.”