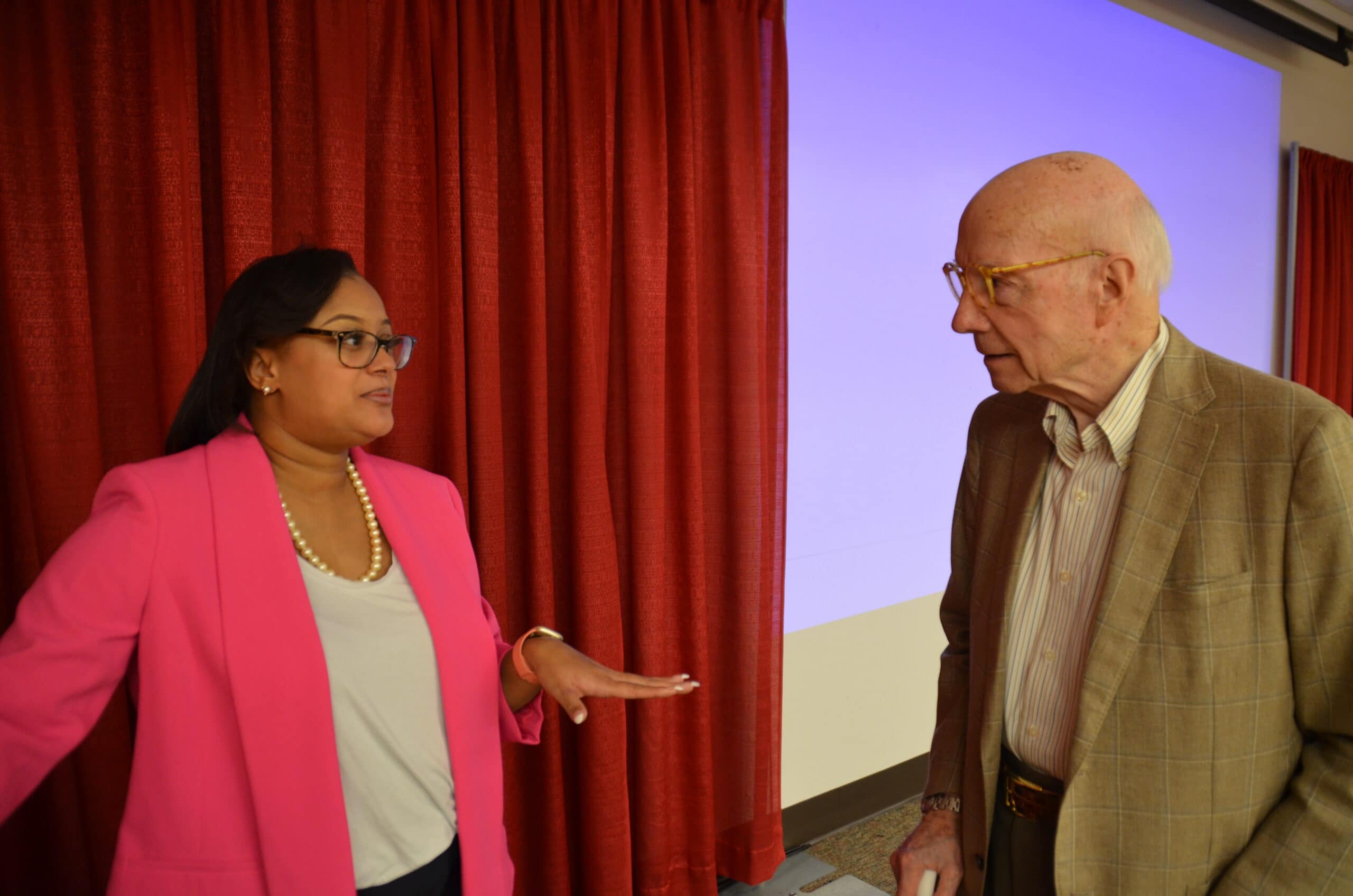 Dr. Joseph Bates speaks to Samantha Wells, a doctoral student in the Fay W. Boozman College of Public Health, following her Grand Rounds presentation at the Arkansas Department of Health.

Aug. 16, 2022 | Standing behind a podium in the Rahn Auditorium, Joseph Bates, M.D., MS., prepared to present an award during the University of Arkansas for Medical Sciences’ Fay W. Boozman College of Public Health’s 2022 Convocation.

Bates, the associate dean for Public Health Practice, marveled over how the auditorium was smoke-free and clean. After gazing around, he then addressed the many students, family members, faculty and staff who were in attendance.

“Believe it or not, there was a time in Arkansas where you could smoke anywhere. This auditorium would’ve been filled with smoke. Office buildings, restaurants, even hospitals … people smoked wherever they wanted to. Smoke was always around,” he said.

An infant suddenly lets out a high-pitched scream.

Instantly, Bates responded by saying, “See … even that baby doesn’t like how it used to be.”

The 80-plus year old’s quick wit drew heavy laughter from the crowd. But the event itself, the nice auditorium, the many people in attendance — the moment as a whole — represented the growth and success of the college and its role in Arkansas’ public health movement.

In 2000, due to the Tobacco Settlement Proceeds Act, U.S. tobacco companies had to pay nearly $10 billion in damages to states that filed a lawsuit against the companies for marketing to youth. Arkansas now receives an annual payment of nearly $50 million. The annual payments will continue as long as the companies are in business. As of the summer of 2022, Arkansas has received nearly $1 billion from the tobacco companies.

In fall 2001, the Arkansas Tobacco Settlement Commission was created and tasked with monitoring the use of settlement funds. Arkansas is the only state to use the funds exclusively for health-related measures.

“Cigarettes caused people harm in so many different ways, public health officials wanted to spend the funds on improving health,” Bates said. “There was lots of evidence that secondhand smoke caused lung cancer and other problems.”

Nonetheless, establishing a public health college — that would aim to improve Arkansas’ health — was a difficult task mainly because most Arkansans were not familiar with public health.

“A group of public health experts had to explain to people what public health was,” said Kevin Ryan, J.D., the college’s associate dean of student and alumni affairs. “Even amongst long time health care providers and other professionals, when people thought of public health they thought of food and building safety at restaurants, water treatment safety things like that. But when it came to how impactful population science and public health is, people didn’t really appreciate it.” 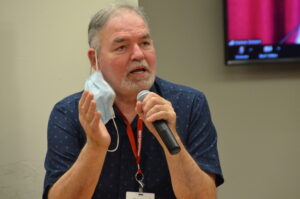 Dr. Kevin Ryan speaks to the attendees of the Stead Scholars Program closing ceremony. The program is a special student internship project led by the Fay W. Boozman College of Public Health.

At the time, there was no major social media platform to help promote the cause. There was no money to purchase ads in media outlets. Therefore, the public health advocates used word-of-mouth to gain statewide support.

A coalition of public health professionals from the Arkansas Center for Health Improvement (ACHI), University of Arkansas at Fayetteville, Arkansas State University, Arkansas Department of Health (ADH) and numerous senior citizens councils traveled the state talking to people about spending the tobacco settlement dollars on health improvement throughout Arkansas.

“The group scattered all over the state trying to get a petition signed supporting putting the issue of the tobacco settlement on the ballot in the upcoming general election,” Bates said. “They explained why various public health programs were needed, including creating a College of Public Health and a building for it.”

“They’d have these town hall meetings, and the group would get on buses and ride to different areas of the state to speak with organizations and community leaders — and then come right back to Little Rock.”

Ryan recalls the many good times and interesting encounters as the group went out to gather signatures. The one thing that stood out the most to Ryan was the group’s cohesion and extreme focus.

“We had a unified message,” he said. “We had a simple message. We all had the same idea when talking to the general public, politicians, to health care sector leaders about the college and why it could make a big difference.

“We explained how a public health college can impact health care and the costs that come with being in a state where there are major health care problems.”

The group also used practical data to show people why the limited number of public health professionals in Arkansas was problematic. Included in that group was Fay W. Boozman — a former state senator who was the Arkansas Health Director at the time. Boozman — whom the school would be named after in 2005 — played a big role in helping people understand why the college was needed.

Eventually, the group of public health professionals and supporters reached their goal. The travel paid off when they got the required number of signatures to get their initiative onto the ballot as part of the Arkansas Tobacco Settlement Proceeds Act.

“The Act was eventually approved by the voters to spend the settlement money completely on various aspects of health,” Bates said.

Ultimately, seven state entities received settlement funds, including the UAMS Fay W. Boozman College of Public Health, which was established through the payments.

The college had its first classes in 2001 in a Little Rock office tower located near Interstate 630. Eventually, the school would be housed in a multistory building on the main UAMS campus in Little Rock.

“The plan was to always build on the UAMS campus. Being in the Freeway Tower for nearly two years, that was temporary,” Ryan said. “It was just a startup location. It was definitely an interesting time.”

James Raczynski, Ph.D., became the full-time dean in 2003, replacing Tom Bruce, M.D., who served as the temporary dean. By December of that same year, the college had five departments, 24 faculty members, a master’s program, and its first Masters of Public Health graduate. Later that month, the Arkansas Department of Higher Education approved the college’s doctoral program. In January 2004, the college’s doctorate program opened for business. 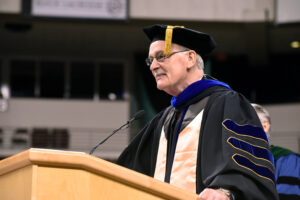 Though progress was steady, Raczynski, now retired, continued the quest to help people understand why the college was needed.

“When it started, there were fewer than five full-time faculty members in the college,” he said. “Many of the first students were people who were already in the medical field in some capacity. They’d heard about the school, believed in the mission of public health, and wanted to be a part of it.

Once a year, Raczynski, along with officials from ADH and Joe Thompson, M.D., MPH, from ACHI, would hold briefing meetings for the legislators. Raczynski also traveled to different counties speaking to organizations about the college and its mission to improve the health of Arkansas.

All the while, getting the college accredited was also of the utmost importance.

“We understood that if the college was accredited and students were enrolled, the legislature would be unlikely to try and take our funding,” Raczynski said. “A key to being accredited is having full-time faculty, students, and master’s level and doctoral level education.

“We had to grow fast. I’m elated at what we did. There was a great team of people I was part of, and we accomplished a lot.”

Explaining to people that everyone’s health is in many ways connected, made a difference.

“Having a school available that gave Arkansans a chance to earn advanced degrees in public health, it represented a chance to make a positive change in this state, and we’ve seen that happen in numerous ways,” he added.

20 YEARS OF GROWTH AND SUCCESS

In May 2004, the college secured accreditation.

“We became accredited as a school of public health, that was huge,” Raczynski said. “That’s the moment when I felt we arrived. That was a landmark moment.”

Becoming accredited is something that was made possible by a lot of people working hard and being in one accord, according to Bates. 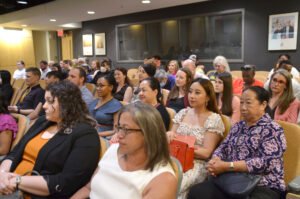 Fay W. Boozman College of Public Health students, their family members, along with COPH faculty and staff are in the Rahn Auditorium listening to a presentation during the 2022 convocation.

“The group was on the same page throughout the process, and Dr. Raczynski was a visionary. He did a lot to build this college,” Bates said. “This college has exceeded my initial hopes and dreams. It gets stronger each year.” 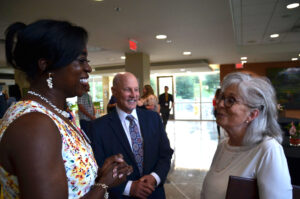 Further evidence of the college’s growing prestige is how it was recently granted another term of accreditation — through July 1, 2029 — by the Council on Education for Public Health.

In a unique, unexpected way, COVID-19 has also aided the growth of the college over the past couple of years.

In spring 2020, Arkansas had its first confirmed case of the virus. Since then, COVID-19 has been a constant health threat in Arkansas. The effects of the virus and the primary ways that health professionals have suggested that people avoid being infected has shed light on the overall concept and importance of public health. That equates to a lot of attention for the college, which produced numerous statewide COVID-19 reports. Many faculty members also conducted key research about the virus.

“The pandemic has brought public health to the forefront of public conscientiousness because of its widespread impact and the seriousness of the disease,” said Mark Williams, Ph.D., dean of the college.  “Students recognize public health science and practice is a means to help improve the lives of people living in our Arkansas communities.”

Williams said graduates of the college are now public health role models in their respective communities. The alums are a key cog in the quest to continually upgrade the health of Arkansans.

“Public health practitioners bring a particular perspective to public discussions about local problems and solutions for those problems,” he said. “Their advice is valued and respected. It has fallen on public health scientists and practitioners to report scientific findings to people in the community and to make those findings understandable so that people can take appropriate health affirming actions.” 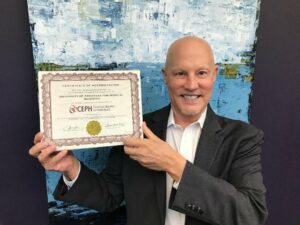 Dr. Mark Williams, dean of the UAMS Fay W. Boozman College of Public Health, proudly displays the college’s Council on Education for Public Health, certificate of accreditation. The college is currently accredited through July of 2029.

Currently, the college has nearly 70 faculty members. The faculty and staff of COPH have conducted research in each of Arkansas’ 75 counties — research that has been funded by a variety of organizations and donors. Nearly 1,000 people have earned graduate degrees from the college. The school now offers 26 degree programs, including one that is fully online.

“The foundations and funders have realized that people are doing important work that impacts the health of the state of Arkansas,” Ryan said.  “There are several ADH staffers who are either alums of this college or have gotten formal training at our college. Once this college started growing, that upward trend has never reversed. Student enrollment continues to grow.”

“We now have a highly trained public health workforce in Arkansas,” Raczinsky said. “Much of that is a reflection of the college. The college has improved the health of Arkansans.”

Additionally, the school has students, faculty and staff from several other states and countries.

During the 2022 convocation, Williams looked out into an audience of individuals representing those numerous nationalities and demographics and reminded them of why they’re so important to helping Arkansas become a healthier state.

“Your education, your outlook is invaluable as you’re now part of the mission to promote good health in Arkansas,” he said. “You all have received a top-notch education from this college. Now it’s time use what you’ve learned to make a positive impact in the areas where you live and work.”